On 8th December representatives of churches and other faith groups met at St Margaret’s Westminster, the parliamentary church, for a vigil organised by the Churches Refugee Network (CRN) . The vigil was intended to offer a welcome to refugees and to demonstrate to parliamentarians the concern of faith groups about current asylum policy. There was a shifting population of participants throughout the day with perhaps 150 in total, including some parliamentarians such as the Shadow minister for overseas development and his aides, and at least one member of the House of Lords.

There was a wide range of speakers, some of whom had parents who had been refugees or immigrants. Others had forebears in this country going back generations. All were united in their concern and action for refugees. Shuaib Yusaf from Muslim Aid, asked to speak from a Muslim perspective, said there was only one perspective – that of humanity.

The most devastating testimonies came from asylum seekers who had fled death, torture and danger in their home countries and had then experienced detention and the harsh dealings of our asylum and migration policy . ‘I thought I would find protection’ said one, ‘ but I was criminalised, traumatised and enslaved.’

Christian Mesnil, a volunteer for Secours Catholique in the camps of Calais, described the shocking conditions in which the refugees survive and the lack of action by the French state. He also signalled the growing European solidarity movement.

Rabbi Helen Freeman from the West London synagogue, pointed out the many times that the exhortation to welcome the stranger is to be found in the books of Moses. There is a human temptation to be hostile to’ the other’ and Jews have known what it was to be ‘the other ‘ for much of history. There is a religious duty to ‘repair the world’ , to take action.

Helen Tetley, minister of St John’s Methodist Church in Whitstable described the initial hostility that her church met in its support for refugees, and how this shifted and hearts and minds were changed. Media images of a drowned child awakened compassion.

During the vigil we were asked to light a candle, praying for migrants as they journey in search of safety and seek to make a home in a foreign land. We put our signatures on a ‘Refugees Welcome Here’ banner and wrote messages on postcards expressing support for those working to alleviate the suffering of migrants in Eastern Europe.

The closing prayers spoke of a 100,000 welcomes and we were asked to see God in the faces of the new Britain.

Churches, Church leaders and aid organisations across Britain and Ireland are responding to the refugee crisis calling on their governments to take action, encouraging donations from church members and providing support where possible, often through partner organisations.Below we list some of the responses from the churches and initiatives by Christian aid agencies:Updated 17 December 2015 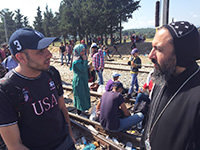 Senior UK Church leaders and representatives visited Idomeni, on the Greek-Macedonia (FYROM) border, where they met some of the thousands of refugees fleeing conflict. A full report is now available to download.The group, part of a Churches Together in Britain and Ireland (CTBI) delegation, also held discussions with local volunteers and activists, United Nations High Commissioner for Refugees (UNHCR) representatives, Médecins Sans Frontières (MSF), Médecins du Monde, and local government officials.You can also read the Press Release. Photos from the visit can be viewed on Flickr. 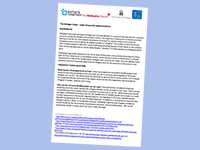 This briefing document from the Joint Public Issues Team (JPIT) answers Frequently Asked Questions (FAQs) such as what help has currently been pledged by the UK? Can the nation can cope with housing these refugees? Are refugees attracted here because of the generous benefits system? What is being done by charities, churches and agencies in the UK? Plus how can individuals and churches get involved?Download the Refugee FAQ from the JPIT website. 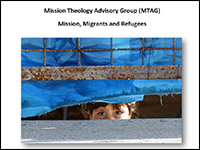 This resource from the Mission Theology Advisory Group (MTAG) is intended to stimulate thinking and reflection about what happens in the long term to those people from Syria, Afghanistan, Eritrea, Somalia, Nigeria and many others fleeing war, violence and persecution, who come to live in the UK and how the Church’s mission is shaped to respond to those to whom we pledge our loving service.Download Mission, migrants and refugees – theological reflection. 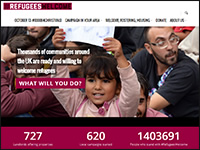 Citizens UK has set up a website to help co-ordinate a civil response to the refugee crisis in Europe, including local campaign groups and training, encouraging and supporting fostering and adoption of refugees, mentoring and befriending, and finding housing. The ‘Board’ brings together leading faith groups, educational organisations, unions and private sector leadership. Initial members include Bishop Paul Butler (Church of England), Bishop Pat Lynch (Catholic Bishops Conference) and Rev Lynn Green (Baptist Union of Great Britain). Find out more from #refugeeswelcome.

CCME on refugee crisis: analysis and what we can do 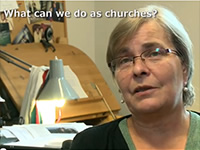 Reflections on the refugee crisis 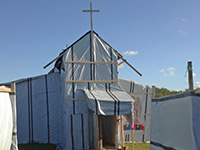 This blog from the Revd Juliet Kilpin, published by the Joint Public Issues Team, provides seven insightful reflections on the refugee crisis and questions whether we are ‘witnessing a paradigm shift and entering a new normal’ – read Reflections on the Refugee Crisis.

Supporting migrants in the UK 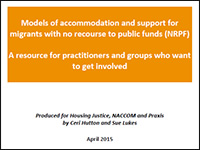 This resource  for practitioners and groups who want to get involved helping migrants within the UK, produced for Housing Justice, NACCOM and Praxis, looks at models of accommodation and support for migrants with no recourse to public funds. It can be downloaded from the Housing Justice website.