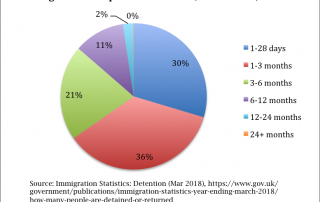 The Home Office and Office of National Statistics regularly publish detailed tables showing the numbers of people held in immigration detention and subsequently released or removed from the UK. But […]…

National Statistics: How many people do we grant asylum or protection to? Published 24 May 2018

Data on transfers under the Dublin regulation can be found in the Asylum tables.

We provide a more detailed commentary on an annual basis. This is included in ‘Immigration Statistics, April to June 2017’.

In the year ending March 2018, there were 14,166 grants of asylum, alternative forms of protection and resettlement, down 11% compared with 15,973 in the previous year. This comprised:

Additionally, 5,874 Family reunion visas were issued to partners and children of those granted asylum or humanitarian protection in the UK, a 2% increase since last year. Of these, 2,883 (49%) were issued to children.

The number of asylum applications in the UK from main applicants decreased by 8% to 26,547 in the year ending March 2018. The fall in asylum applications reflects a return to levels seen before the European migration crisis in 2015. The falls are consistent with what has been seen more widely across Europe, with a decrease of around 41% in applications to EU countries in the last year.

There were 774 grants of asylum or alternative forms of protection to Syrian nationals (including dependants) at initial decision in the year ending March 2018 (down 49%).

A total of 5,760 people were resettled in the UK in the year ending March 2018 under various schemes. This included 4,342 Syrian nationals who were provided protection under the Vulnerable Person Resettlement Scheme (VPRS), bringing the total number of Syrians provided protection to 11,649 since the scheme began in 2014.