In this week’s newsletter:

The judges’ revolt and the Home Office’s assault on love 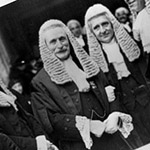 Home Office anti-foreigner propaganda has been unavoidable recently. A particularly nasty Valentine’s Day themed social media campaign was followed by the Home Secretary’s latest attack on Judges who interpret the laws set by parliament rather than carry out her latest populist dictat. Read all about it at theNCADC blog.

When a Home Secretary starts accusing the judiciary of subverting democracy, we should get nervous, writes Kate Blagojevic of Detention Action. But when new legislation designed to bypass human rights law is announced, we need to actively resist.

The Guardian reports that the government has backed down on the use of force on children and pregnant women it seeks to remove from the UK.
Just before a high court challenge was due to start, the UK Border Agency reinstated a policy on its website which says that force must not be used against pregnant women and children except to prevent harm. The judge in the case, Mr Justice Turner, said of the move by the UKBA: “It’s not appropriate in my view that policies of this importance should disappear and reappear.” 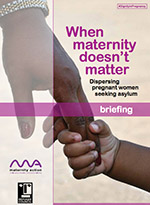 The health of hundreds of pregnant women and their babies are being put at risk by the UK Border Agency’s policy of dispersing asylum seekers, according to midwives involved in their care,reports the Guardian.

A report published on Monday by the Maternity Action and the Refugee Council says that the immigration authorities are endangering the health of pregnant asylum seeking women and their babies by moving them to accommodation around the country and so removing them from essential healthcare and leaving them isolated.

The Home Secretary has taken a last minute decision to pull out of her appeal in the case of a Nigerian man (HA) with mental health problems who experienced inhuman and degrading treatment while in immigration detention.

The charities Mind and Medical Justice (represented by Sue Willman of Deighton Pierce Glynn Solicitors), who were given permission to intervene in the appeal, say that, in taking this decision, the UK Border Agency (UKBA) effectively accepts that its policy of detaining people with mental health problems in immigration detention led to a serious breach of HA’s human rights. Read more.

G4S takeover has been a ‘disaster for asylum seekers’

G4S’s takeover of asylum housing under the UK Border Agency’s (UKBA) COMPASS contracts has been a disaster for asylum seekers and their families in Yorkshire and the Humber and the North East, a new report claims.

Compiled for the Independent Chief Inspector of Borders and Immigration, the report also alleges that the allocation of the contracts to an international security company rather than a housing provider suggests that the contracts were allocated for political rather than commercial reasons. Read more.

Extra detainees are still being held at airports before charter flights, a year after MPs and prison inspector demanded an end to the “inhumane” practice.
Corporate Watch and Stop Deportations are working on a joint report examining the various legal aspects of charter flight deportations. Read the Corporate Watch report here, and the Observer article here.
If you have been used as a reserve in this way, or know of anyone who has, please get in touch and we can put you in contact with the researchers.

Credit: Erfan Alaei – the painting illustrates his fears, hopes and concerns. He has experience of the UK asylum system